She married Louis "Lee" James Bonito and had five children: Salvatore Bonito (1936–2021), Fred Bonito, Camille Addario, James Bonito and Robert Bonito. Her husband forced her to have three back-alley abortions and left her when she was pregnant with their 5th child.

She worked as seamstress at Union Garment until becoming self-employed, doing alterations and fabrications from her home for dozens of loyal clients since 1970.

She shot to internet fame on her 102nd birthday in 2015, when a video of her blowing her false teeth onto her birthday cake went viral. As of May 2021, the video has over 86.700 views. She had the short documentary about her life, "LOVE NONNIE", made by granddaughter Lisa Addario. 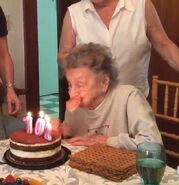 Louise Bonito on her 102th birthday

Louise Bonito on her 107th birthday