Louisette Texier [Armenian: Արփինե Հովհաննիսեան] (née Arpiné Hovanessian; 18 February 1913 – 20 July 2021) was a Armenian-born French centenarian who was the oldest known person born in Armenia at time of her death. She was one of the last survivors of the 1915 Armenian genocide.

Louisette Texier was born in Ottoman Empire (present-day Turkey) on 18 February 1913. In 1915, her father was hanged by the Turks during the Armenian Genocide. Her mother placed she and her sister Mariam in an orphanage in Istanbul. When she returned to reclaim her daughters, she found they’d been separated and evacuated. Louisette was sent to Marseille and she never saw her family again.

She was never adopted and later was sent to a boarding school in Paris. She escaped school at age 15, became a cabaret dancer and saved enough money to start her own business selling women’s clothing.

During the World War II, she worked with the Resistance, hiding Jewish families. Afterwards her business grew and she became one of the first women in France to own a car, later becoming a rally car driver, entering many competitions.

A friend named Georges Houel asked her to drive him out to Montlhery to watch a friend race. It was there that she met Jean Behra.

She got married, but later divorced. She had two children.

At age 105, she wore a walker to get around, but still enjoying go-kart racing with her grandchildren and great-grandchildren.

Louisette Texier died in La Romieu, Occitanie, France during the night of 20 July 2021 at the age of 108 years, 152 days. Her funeral was held at the Chapelle Saint-Geny de Lectoure. 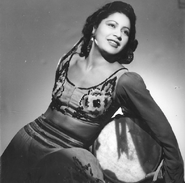