Luis Torras Martinez [Spanish: Martínez] (born 29 December 1912) is a Spanish painter and centenarian who currently is the oldest known living active painter in Spain and the world. He also is the second-oldest known living man in Spain, behind Antonio Alvarado Largo.

Luis Torras Martinez was born in Vigo, Galicia, Spain on 29 December 1912. He studied business at the College of the Marist Brothers. Later, he worked in his family candle shop business. In 1935, at the age of 23, he moved to Madrid to study at the Royal Academy of Fine Arts of San Fernando.

In 1936, at the beginning of the Spanish Civil War, Torras Martinez moved to Vigo on the occasion of school holidays to serve in the army into the army and as a result of the fighting, wounded on the northern front by two bullets, one of them close to the brain, which would make him permanently deaf.

He married Maria Jesus Incera in 1946. The couple had one son: Luis.

Later, he finished his studies and obtained the title of Professor of Drawing, a profession he would exercise, first in Madrid and later, from 1954 in Vigo, at the School of Arts and Crafts on Garcia Barbon Street.

He won second prize in the regional exhibition held in Vigo in 1960. At the 1962 National Gallery of Fine Arts, he was awarded the third medal.

At the age of 109, he still paints every day and making various paintings.

Torras Martinez currently lives with his wife Maria Jesus Incera (aged 98 in January 2021) in Vigo, Galicia, Spain, at the age of 109 years, 190 days. 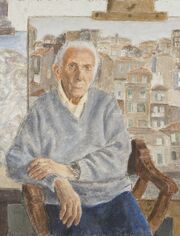 Torras Martinez at the age of 107