Mabel Jesse Irene Crosby (7 September 1909 – 30 December 2020) was a British-born Australian supercentenarian who was the oldest known living person in Australia. Furthermore, she was the last known person living in Australia who was born in the 1900s decade. Her age is currently unvalidated by the Gerontology Research Group (GRG).

Mabel Crosby was born in Kent, England, UK, on 7 September 1909. Her parents were called John and Janet. She had three siblings: Janet, Hilda, and Stuart. In 1913, when she was four years old, her family moved to Australia and bought a farm near Newcastle, New South Wales. Crosby worked as an apprentice dress maker before getting married.

In 1931, Crosby married Norwegian Ernulf Crosby, and they initially moved to Port Kembla, south of Sydney, New South Wales. However, after suffering from respiratory problems due to the nearby steelworks, they moved to Narara, north of Sydney, where they ran a small citrus and poultry farm. The couple had four children, three of whom were still living as of September 2019. They were married until Ernulf died of a heart attack in 1970. In 1984, Crosby moved to Brisbane, Queensland to be closer to her family.

Crosby described the secret to living a long life as "staying active". A keen gardener, she was still mowing her own lawn at the age of 100, and she also enjoyed bowling. At the age of 107, she took a trip to Fiji.

Crosby had been the oldest known living person in Australia since the death of Agnes Kluckhenn on 24 November 2019. In an interview in May 2020, during the COVID-19 pandemic, Crosby said that she was "coping relatively well" due to her experience living through two world wars and the Great Depression.

Crosby (sitting front) with her mother and siblings, 1910s

Crosby with her husband, Ernulf 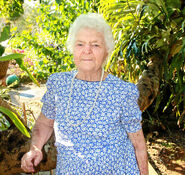 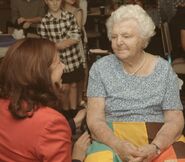 Crosby with members of her family in an undated photo