Madeleine Burille was born as Madeleine Magnetet on 22 June 1911 in Blamont, Doubs, Bourgogne-Franche-Comte, France. Her father, Stephane [French: Stéphane], was a customs officer in Goumois, and her mother was a housewife. She spent her childhood in Trevilliers, and later made studies at Besancon's top university.

In 1924, Burille's parents moved to Saint-Louis, as her father obtained a customs officer post in Basel, Switzerland. She said: "In 1924, Saint-Louis was a village. Everybody knew each other!" Milk was delivered by a milkman who was riding a horse. Once a year, she danced the waltz at the custom's bal in Basel.

Burille obtained her "brevet supérieur" at Saint-Louis's top university, and became a substitute teacher. When World War II began in 1939, she had already fled in Jura before an evacuation happened. According to her, it was because of "an indiscretion from the police superintendent's wife."

While searching a postal card, she met her future husband, Lucien Burille, who was an aviator in leave. She later told: "I was amazed, he had language. He expressed himself well!" They married in August 1941 in Tenay, Savoie, Auvergne-Rhone-Alpes. They had a son, Alain (1942–1957), who died by drowning in Lake Annecy.

After the war, the family came back to Saint-Louis, in the house they built in Hohneck street in 1955. Burille was a teacher in boys schools in Huningue, then in Saint-Louis. Her headmaster's wife lived to age 109, and Burille later said it's her objective to beat her.

Burille retired in 1966, and travelled with her husband in the USA, in Egypt, in Japan, and even in north Pole. Her husband died in 1979. She kept on doing the shopping and to take care of her house until age 102.

At automn 2015, Burille moved to Home Blanche-de-Castille, a nursing home in Saint-Louis. Each thursday, one of her former pupils visits her and brings her a rose; in 2019, he was going to celebrate his 80 years. On her 108th birthday in 2019, Burille was reported to have a good appetite, and to be almost vegetarian.

COVID-19 Survival and after

In June 2021, Burille celebrated her 110th birthday with her family, the mayor of Saint-Louis, the staff of her nursing home, and with vicar Philippe Amecy. Following the death of 111-year-old Irene Castera on 12 September 2021, she became the oldest known living person in Grand Est.

Madeleine Burille currently lives in Saint-Louis, Haut-Rhin, Grand Est, France, at the age of 110 years, 215 days. She is the oldest known living person in Grand Est. 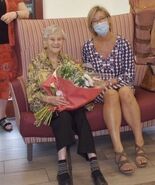