Makaru Nakanishi [Japanese: 仲西眞苅] (15 December 1901 – 28 February 2013) was a Japanese supercentenarian whose age has been validated by the Gerontology Research Group (GRG).

Makaru Nakanishi was born in Okinawa Prefecture, Japan on 15 December 1901. He worked in Japan’s Waterworks Bureau before retiring. At the age of 107, he continued to live independently, only receiving help from a caregiver 3 times a week. Many of his family members lived nearby, and often visited him in his home.

Nakanishi died in Urasoe, Okinawa, Japan on 28 February 2013 at the age of 111 years, 75 days. At the time of his death, he was the second-oldest living person in the Okinawa Prefecture (behind Toshie Yorimitsu), the second Japanese man (behind Jiroemon Kimura), and the fourth oldest man in the world (behind Jiroemon Kimura, James Sisnett, and Salustiano Sanchez). 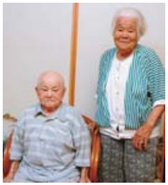