Manoel de Oliveira GCSE GCIH (11 December 1908 – 2 April 2015) was a Portuguese centenarian, film director and screenwriter. He also was one of oldest known living men in Portugal at the time of his death.

Oliveira was born in Porto, Portugal on 11 December 1908. His parents were Francisco Jose de Oliveira and Candida Ferreira Pinto. His family were wealthy industrialists and agricultural landowners. His father owned a dry-goods factory, produced the first electric light bulbs in Portugal and built an electric energy plant before he died in 1932. Oliveira was educated at the Colégio Universal in Porto before attending a Jesuit boarding school in Galicia, Spain. As a teenager his goal was to become an actor. At age 17, he joined his brothers as an executive in his father's factories.

He first began making films in 1927, when he and some friends attempted to make a film about World War I. In 1931 he completed his first film Douro, Faina Fluvial, a documentary about his home city Porto made in the city symphony genre. He made his feature film debut in 1942 with Aniki-Bóbó and continued to make shorts and documentaries for the next 30 years, gaining a minimal amount of recognition without being considered a major world film director. Among the numerous factors that prevented Oliveira from making more films during this time period were the political situation in Portugal, family obligations and money.

In 1971, Oliveira directed his second feature narrative film, Past and Present, a social satire that both set the standard for his film career afterwards and gained him recognition in the global film community. He continued making films of growing ambition throughout the 1970s and 1980s, gaining critical acclaim and numerous awards. Beginning in the late 1980s he was one of the most prolific working film directors and made an average of one film per year past the age of 100. In March 2008 he was reported to be the oldest active film director in the world. He was also the only filmmaker whose active career spanned from the silent era to the digital age.

In July 2012, Oliveira spent a week in hospital to treat a respiratory infection and congestive heart failure. Oliveira died in Porto on 2 April 2015 at the age of 106 years, 112 days. He was survived by a wife, four children, and numerous grandchildren and great-grandchildren.

Oliveira at the 1991 Venice Film Festival

Oliveira and Michel Piccoli at the 2001 Cannes Film festival 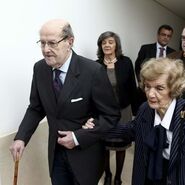 Oliveira with his wife Maria Isabel