Benavente Sanhueza was born in Concepcion, Bio Bio Region, Chile, on 25 September 1909. His parents were Manuel Jose Benavente Benavente Sr. (born 1878) and Celia Sanhueza Saavedra. Several notable ancestors on his paternal side included Diego Jose Benavente (1790–1867), who was a former Senate President and Minister of Finance of Chile, and Jose Maria Benavente (1785–1833), Minister of War and Navy of the Republic of Chile during the Chilean War of Independence against Spain. He had at least 8 siblings, including Rafael (1908–1993), Hernan, Josefa and Wenceslao. At the age of 15, he started working at the “Juzgado De Letras De Coronel” courtroom in Coronel, Bio Bio, after which he served for 30 years at the “Casa de Moneda”, where he became deputy director. During his life, he worked on many positions, including the first official of the Arauco Court of First Instance - dealing with civil and criminal cases, an assistant official of the Fiscal Treasury of San Vicente de Tagua Tagua, the Honorary president of the "Youth for Understanding Chile" - an entity that promotes youth exchange between the United States and Chile and the first administrator of commercial premises in the center of San Bernardo (which includes "Santa Javiera" bakery, shops, restaurants, a hairdresser, watch shop, bookstore, exchange houses and more). Under his administration, the shopping mall now has more than 40 stores.

Benavente Sanhueza married Sara Salas Iriarte and they had 2 daughters: Pilar and Maria Elena. He is a notable person in his community, and is a recognized member of his rotary of San Bernardo. He was a main contributor of the San Bernardo rotary book for the years 1932 to 1983.

In 2008, at the age of 99, he obtained the Diego Portales medal, the highest award given by the Confederation of Retail Trade and Tourism of Chile (Spanish: "La Confederación del Comercio Detallista y Turismo de Chile"). He was also recognized as an "illustrious son" of his city.

Benavente Sanhueza with his father in an undated photo.

Benavente Sanhueza at a rotary club meeting in 1963. 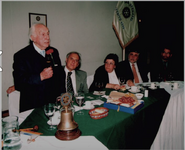 Benavente Sanhueza at the age of 100.

Benavente Sanhueza at the age of 105.

Benavente Sanhueza at the age of 109.