Marcel Alexis Meys (12 July 1909 – 15 December 2021) was a French supercentenarian whose age is currently unvalidated by the Gerontology Research Group (GRG). He was the oldest living man in France, after the death of Jules Theobald on 5 October 2021 until his death. He was also the last (known) surviving French man born in 1909, as well as the 1900s decade.

Marcel Meys was born in Saint-Julien-de-l'Herms, Isere, France on 12 July 1909. Meys remembered his father leaving to fight in the First World War in 1914 and returning later in the war.

During World War II, Meys worked as an Ambulance Driver. Later in the war, Meys helped the French Resistance by transporting supplies in his Ambulance.

After the war, Meys continued his work as an ambulance driver before his retirement in 1967. He had lived in the same house since 1957 in Saint-Romain-en-Gal, Rhone, Auvergne-Rhone-Alpes, France.

Meys' wife, Marthe, died in December 1998. Since his centenarian years, he had lived with his daughter. As of 2021, he had one grandchild and one great-grandchild. In July 2019, he celebrated his 110th birthday.

On 29 May 2021 at the age of 111 years, 321 days, he surpassed the age of Maurice Floquet as the second-oldest French man ever and the oldest man ever from metropolitan France.

Following the death of 112-year-old Jules Theobald on 5 October 2021, Marcel Meys became the oldest living man in France. At the time, he was still living in his home in Saint-Romain-en-Gal. In December 2021, he tested positive for COVID-19, and was admitted at hospital in Vienne, Isere.

Meys died of complications due to COVID-19 in a hospital in Vienne, Isere, Auvergne-Rhone-Alpes, France on 15 December 2021 at the age of 112 years, 156 days. At the time of his death, he was the second-oldest known living man in Europe, behind Saturnino de la Fuente Garcia, and the third-oldest known living man in the world, behind Saturnino de la Fuente Garcia and Juan Vicente Perez Mora.

Marcel Meys with his wife (undated). 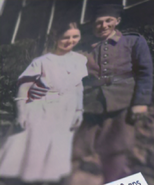 Marcel Meys with his wife (undated).

Marcel Meys September 1943, with his wife and his daughter. 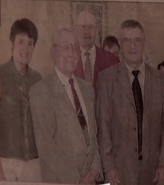 Marcel Meys in December 2017, aged 108, with Marie-Alice Seux and the mayor Pierre Langlais.