Maren Bolette Torp (née Kristiansen; 21 December 1876 – 20 February 1989) was a Norwegian supercentenarian whose age is validated by the Gerontology Research Group. At the final age of 112 years and 61 days, she is the the oldest lived person in the history of Norway, inheriting the title from Norwegian-Canadian skier Herman Smith-Johannsen, who died just a year prior in 1987.

Maren Bolette Kristiansen was born in Fet, Akershus, Ostlandet, Norway on 21 December 1876 as the eldest of eight children born to Ludvig Christiansen (1850–1940) and Anne Nielsdatter (1848–1935). She grew up in the area and later came to Kristiania (present day Oslo). She met and married Ole Arnt Torp and had eight children together with him. She was widowed in 1929. She remained in Oslo for the rest of her life. She lived independently up until she was 95, after which one of her daughters helped care for her. Her daughter died in 1987 and Maren moved into a nursing home.

On 21 December 1986, she became the first supercentenarian from Norway (excluding Norwegian emigrants like Wilhelmine Sande and Herman Smith-Johannsen) and became the Norwegian longevity recordholder on 13 July 1988 at the age of 111 years, 205 days after suprassing Smith-Johannsen's final age. On 21 December 1988, she was the first Norwegian person who celebrated her 112th birthday. At the age of 112, it was mentioned that she was fragile and was nursed in a hospital for several years.

Maren Bolette Torp died in Oslo, Ostlandet, Norway on 20 February 1989, aged 112 years, 61 days. At the time of her death, she was one of the oldest people in the world (she was even considered the world's oldest living person until Jeanne Calment's age was validated) and the third oldest living person in Europe behind Calment and Lydie Vellard, both from France. Her secret to her long life was working and living a moderate life.

Torp on the day of her wedding. 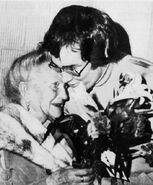