Margaret Dolan (30 August 1893 – 2 December 2004) was an Irish supercentenarian who was the oldest person living in Ireland at the time of her death. Her age is validated by the Gerontology Research Group.

Margaret Dolan was born in the village of Corofin, County Galway, Ireland (then part of the UK), as the eldest of seven children born to Michael and Julia Dolan. Media reports differed as to her date of birth; it was variously reported as 27 July, 28 July, and 28 August 1893; however, according to her birth record, she was born on 30 August 1893. In the 1920s, she spent two years in New York, USA, but returned to Ireland at the time of the Wall Street Crash. She never married.

In her later life, Dolan lived with her niece in Galway, Ireland. She broke her hip at the age of 100. To celebrate her 110th birthday, was presented with a medal from Irish President Mary McAleese and the Mayor of Galway, Terry O’Flaherty, presented her with a bouquet of flowers. She died in Ireland on 2 December 2004, at the age of 111 years, 94 days.

At the time of her death, Dolan was the fourth-oldest Irish person ever recorded, after Katherine Plunket, Elizabeth Munson, and emigrant Margaret Hegarty. As of 2020, Dolan's age has since only been surpassed by one other Irish person, Kathleen Snavely. 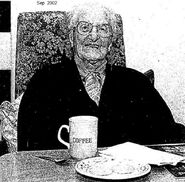 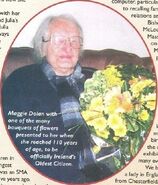