Margaret Hollenshead (née Berthot; born 22 April 1911) is an American supercentenarian whose age is currently unvalidated by Gerontology Research Group (GRG). She currently is the second-oldest known living person in Kansas, behind Gertrude Stern.

As a child, she wanted to become a lawyer, but was refused. Instead, she studied music and then taught at different schools in the Chanute area for 35 years. She married Howard Hollenshead and gave birth to three children: Margaret Ann, Hugh and Lynn. The couple lived in Texas, California and Oklahoma before settling back in Kansas in 1947. Howard worked in the oil industry and joined Margaret’s family’s business, Berthot Planning Mill, after returning to Chanute. Howard died on 31 October 1988.

In November 2017, Margaret moved to the Country Place Senior Living and Memory Care. She celebrated her 110th birthday on 22 April 2021. 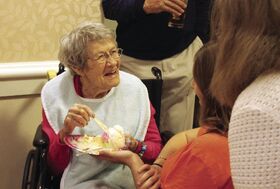 Margaret Hollenshead on her 107th birthday in 2018 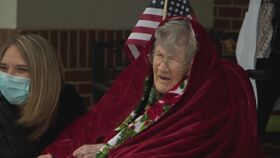 Margaret Hollenshead on her 110th birthday in 2021