Sara Margaret Reed (20 April 1910 – 8 July 2021) was a British supercentenarian whose age is currently unvalidated by the Gerontology Research Group (GRG).

Reed was born in Loughgilly, Armagh, Ireland, UK (now Northern Ireland, UK) on 20 April 1910. During the Second World War she was part of the Royal Air Force at Farnborough in Hampshire, England, where she served in a secret establishment. After getting married, she moved to Cornwall, England, and has one child named David.

Since 2015, Reed has lived in a care home in Burnham-on-Sea, Somerset, England. She celebrated her 110th birthday in April 2020. In December 2020, she became one of the oldest people to receive the Wikipedia:Tozinameran Pfizer–BioNTech COVID-19 vaccine.

Reed on her 108th birthday 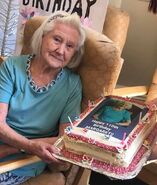 Reed on her 110th birthday