Marguerite Wabano (née Kioke, 28 January 1904 – 13 November 2015) was a pending Canadian supercentenarian[1] who was the oldest living person in Canada from the death of 112-year-old Orma Slack on 13 April 2015, to her own death seven months later.

Marguerite Wabano, widely known as Gookum (Cree for grandmother), was born out in the bush along Ekwan River, in the boreal forest of Northern Ontario.[2] She was the youngest of 6 siblings, born to parents David and Hannah Kioke.[3] She was a monolingual Cree speaker, having never learned English or French. When she was about 7 years old, she was forced to attend St. Anne's Indian Residential School, however, after 2 years of going to the school, she and her family moved further into the bush to hide from the school and the authorities.[3] She didn’t talk about it very much. She missed her parents and living in the bush. She used to go hunting and fishing.[4]

She later met Raphael Napihen Wabano along Kattawapiskak river, she married him and the couple had 7 children. Tragically, 3 of her children died whilst they were still very young. Wabano and her family later settled in Moosonee, Ontario.[3] Raphael died in his 90s; the couple had been married for 75 years.

At the age of 99, Wabano was fitted with a pacemaker, although years later, doctors discovered that it had stopped working, and were unsure as to how long it had been inactive.[3] In 2008, Wabano and other residential school survivors were invited to the Canadian House of Commons, and were issued with a formal apology by Prime Minister Stephen Harper, the act of reconciliation for Aboriginal abuse.[5]

At the time of her 110th birthday in 2014, Wabano was still living independently in her own apartment,[5] and was still able to walk up and down stairs unaided.[3]

When asked about the secret to her longevity, she said: "No use carrying things around. Learn to forgive, and it'll help you to live a long life." She also said that eating wild meat and drinking natural teas helped her to live a long time.

Wabano died in her home in Moosonee, Ontario, Canada on 13 November 2015 at the age of 111 years, 289 days, in consequence to having refusing to eat. She was succeeded by Doris Lillian Cornell as the oldest living person in Canada.[6]

The earliest census records for Marguerite Wabano suggests that she was a year older, and had a birthdate of 28 January 1903.

As a older woman 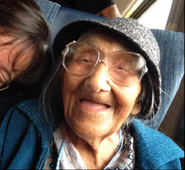 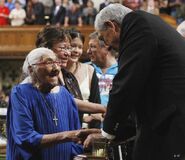