Maria Aulenbacher (née Kremer; born 7 November 1909) is a German-born American supercentenarian who is the oldest known person living in the U.S. state of South Carolina. Her age is currently unvalidated by the Gerontology Research Group (GRG).

Aulenbacher was born in the Taunus Mountains of Germany on 7 November 1909. She is the oldest of six children. In 1937, she married August Aulenbacher, and they had two children: Birgit Dickerson and Michael Aulenbacher (deceased as of 2009). She raised them alone after her husband was killed in World War II.

In 2008, she traveled to Pittsburgh, Pennsylvania, United States. In her later life she also traveled to Italy, Spain and Portugal. At the time of her 100th birthday, she lived in Wiesbaden, Hesse, Germany. One of her sisters was still alive at that time and lived nearby. At the age of 101, she moved to the United States.

In February 2021 at the age 111, she received her first dose of covid-19 vaccine, making her one of oldest people to receive the COVID-19 vaccine.

Aulenbacher currently lives in Travelers Rest, South Carolina, United States, on 112 years, 78 days. She lives with her daughter and son-in-law. 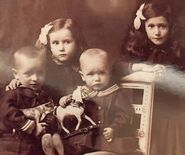 The girl on the right, probably mid-1910s 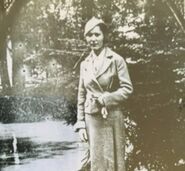 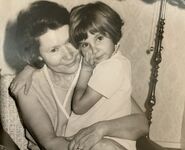 With her daughter Birgit, probably in late 40s/early 50s 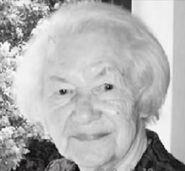 In February 2021 at age 111, walking with a walker (and some assistance from behind)