Maria Branyas Morera (born 4 March 1907) is an American-Spanish supercentenarian whose age is validated by Gerontology Research Group (GRG). She is currently the oldest living person in Spain, as well as the oldest living American-born person. She is also among the oldest people known to have survived COVID-19, which she contracted at the age of 113 in April 2020.

Maria Branyas Morera was born in San Francisco, California, USA on 4 March 1907. Her family emigrated to San Francisco in 1906. They later traveled to New Orleans, from here they departed to Olot, Catalonia, Spain in 1915. While emigrating to Spain aboard the Catalania, Branyas Morera injured her eardrum in a fall, resulting in her permanently losing hearing in one ear. Towards the end of the voyage, Branyas Morera's father, Joseph Branyas Julia, died from pulmonary tuberculosis at the age of 37, leaving Branyas Morera's mother to raise the family of five on her own.

Branyas Morera married in 1931, and had three children.

In 2000, when she was 93, Branyas Morera moved into a care home in Olot. At the age of 110, she reportedly still read the newspaper every day. As of August 2019, she had 11 grandchildren and 11 great-grandchildren.

Branyas Morera is deaf in one ear, and partially deaf in the other, with precautions taken at her nursing home. This made communication difficult, but using a voice-to-text device, her relatives are able to communicate fluently.

In April 2020, at the age of 113, Branyas Morera tested positive for COVID-19, but successfully recovered. She was the oldest recorded survivor of the disease until Lucile Randon, then 116, of France recovered in 2021. In a subsequent interview with the Observer, Branyas Morera called for a revolution in treatment of the elderly, saying “This pandemic has revealed that older people are the forgotten ones of our society. They fought their whole lives, sacrificed time and their dreams for today’s quality of life. They didn’t deserve to leave the world in this way.”

In January 2021, Branyas Morera received both doses of the COVID-19 vaccine, making her one of the oldest validated supercentenarians to get vaccinated.

She became the last (known) living person in Europe born in 1907, following the death of Marie-Louise Berthelot on 16 January 2021.

She became the last person living in Spain born in the 1900's decade, following the death of Saturnino de la Fuente Garcia on 18 January 2022.

She became the third-oldest validated living person in the world, following the death of Kane Tanaka on 19 April 2022.

She became the last surviving validated emigrant born in 1907, following the death of Casilda Benegas on 28 June 2022.

Since the death of Sofia Rojas on 30 July 2022, Branyas Morera is one of only three validated people born in 1907 who is still living (the others being Fusa Tatsumi and Bessie Hendricks).

She is currently the second-oldest validated person ever to live in Spain, behind Ana Vela-Rubio.

Branyas Morera (second from left) with her family in 1914

Branyas Morera with her mother and sister in 1928 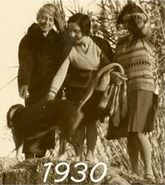 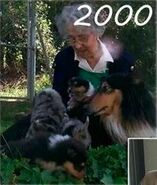 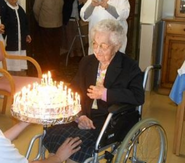 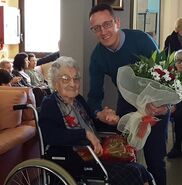 Branyas Morera in 2018 shortly before turning 111 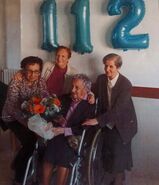 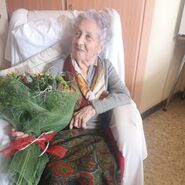 Branyas Morera at the age of 113 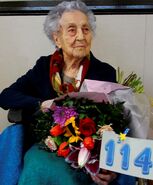