María Capovilla (14 September 1889 – 27 August 2006) of Guayaquil, Ecuador, at the time of her death at age 116 years, 347 days, was an Ecuadorian supercentenarian recognized by Guinness World Records as the world's oldest living person. She was the last remaining validated person born in the 1880s.

Born as María Esther Heredia Lecaro in Guayaquil, María was the daughter of a colonel, and lived a life among the upper-class elite, attending social functions and art classes. She never smoked or drank hard liquor. In 1917, she married a military officer, Antonio Capovilla, who died in 1949. Antonio, an ethnic Italian, was born in Pola, Austria-Hungary (now Pula, Croatia) in 1864. He moved to Chile in 1894 and then to Ecuador in 1910. After his first wife died, he married María. They had five children, three of whom were still living at her passing: Hilda (81), Irma (80), and son Anibal (78). She also had 11 grandchildren, 20 great-grandchildren, and two great-great-grandchildren.[1]

At the age of 100, Maria nearly died and was given last rites, but had been free of health problems since then. On 14 September 1999 she became the first (known) Ecuadorian supercentenarian ever. As recently as December 2005 Maria was said to be in good health and able to watch TV, read the papers and walk without the aid of a stick (though she was helped by an aide). However, she was unable physically to leave her home in the past two years, which she shared with her eldest surviving daughter, Hilda, and her son-in-law. In a media interview, María stated her dislike of the fact that women nowadays are permitted to court men, rather than the reverse.

By March 2006, Maria's health had declined somewhat, and she was no longer able to read the newspaper. She had also nearly stopped talking and no longer walked except when helped by two persons. Still, María was able to sit erect in her chair and fan herself, and had been doing 'fine' until she succumbed to a bout of pneumonia in the last week of August 2006.

Guinness noted that "María Esther de Capovilla has beaten the odds -- not only to live past 116, but to have the records to prove it." Their spokesman, Sam Knights, added in a telephone interview from London that "while a lot of the time it's difficult for people to prove their age, there was no problem with any of the documents we were shown in Mrs. Capovilla's case".[2] Capovilla was finally added to the Guinness website on 12 April 2006.

At the time of her death she was the fifth-oldest fully documented and officially validated person to have ever lived in three centuries.

Following her death in August 2006, her successor as oldest person was Elizabeth Bolden, the previous titleholder. Mrs. Bolden became only the second person to regain the title after losing it (Jeanne Calment was the first).

Capovilla held the record for being the oldest validated person ever from South America, until she was later surpassed by Francisca Celsa dos Santos of Brazil on 4 October 2021. Celsa dos Santos died the day after she broke Capovilla’s continental record. 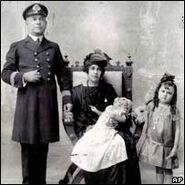 As a young woman with her family 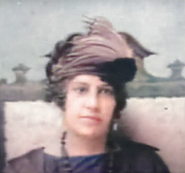 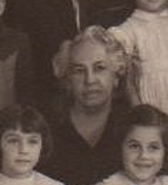 Undated, with her three children