Maria Cruz Martinez was born in Izcue, Navarre, Spain on 3 May 1911. She got married in Arazuri, had four children who have given her three grandchildren and four great-grandchildren. She was widowed in 1972.

She became the oldest known living person in Navarre, following the death of 111-year-old Angeles Alava Jimenez on 21 December 2021.

Cruz Martinez de Irujo currently lives in Navarre, Spain, at the age of 110 years, 266 days. She currently is the oldest known living person in Navarre. 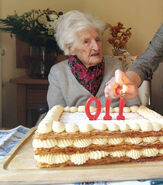