Maria Lazzeri was born in village of Rico di Tresana near Pisa, La Spezia, Tuscany, Italy on 15 March 1904. She later moved to Shettleston, Glasgow, UK in 1924 and married Americo Lazzeri. They had three sons. Her husband died in 1989.

Lazzeri put people decades younger to shame by working in the family fish and chip shop business and Eusebi deli in Shettleston until the age of 100. She moved into Millbrae Care Home in Coatbridge back in 2008. Following the death of 108-year-old Janet Brown on 16 May 2012, she became the oldest (known) living person in Scotland.

Maria Lazzeri died in Millbrae Care Home in Coatbridge, North Lanarkshire, Scotland, United Kingdom on 13 February 2015 at the age of 110 year, 335 days. At the time of her death, she was believed to be oldest living person in Scotland.

Maria Lazzeri in 1945, with her husband Americo. 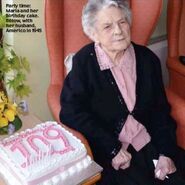