Maria da Costa Almeida (29 September 1899 – 11 September 2010) was a Portuguese supercentenarian whose age is pending by the Gerontology Research Group (GRG).

Maria da Costa Almeida was born in Candosa, Tabua, Coimbra District, Portugal, on 29 September 1899. She worked in agriculture for many decades. She married Jose Macedo dos Santos in 1924. The couple had 3 children. Her husband died in 1972, at the age of 69.

In her last years, she was cared for by her daughter, Irene Costa Santos (born 24 August 1930). She claimed to have no secrets for her longevity and that she always had "iron health", never having any serious health problems. She was also known as "Mariazinha". In 2010, she had 11 grandchildren, 18 great-grandchildren and 7 great-great-grandchildren.

Maria da Costa Almeida died in Ramada, Lisbon District, Portugal, on 11 September 2010, at the age of 110 years, 347 days. She was buried in the Candosa Cemetery. 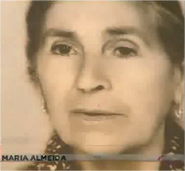 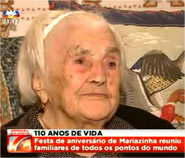