Maria de Jesus (10 September 1893 – 2 January 2009) was a Portuguese supercentenarian who was recognized as the world's oldest living person, following the death of American Edna Parker on 26 November 2008, before her own death a little over a month later. She was the last validated living person born in 1893.[1]

Born in Olival, Santarem District, Portugal, as Maria de Jesus (born illegitimate, "Maria de Jesus" was a given name that was her entire name at birth, "dos Santos" was the surname of her husband but she made little use of it in life). Her mother was Joaquina d'Abreu (1870-1955) and lived to the age of 85.

She married in 1919 with Jose dos Santos and became a widow in 1951, when she was 57 years old. From that relationship, five children were born, three of whom are still living. One of those, a daughter, Madalena, was born on 25 December 1924 and was living with her at time of her death.

She had 11 grandchildren, 16 great-grandchildren, and six great-great-grandchildren. During her lifetime, she visited the hospital only once and was long in very good health, with the exception of her ambulation. Maria worked on the land for her entire life and still lived in her own house instead of a nursing home (like the majority of supercentenarians), where she woke up every morning at 11AM to do her daily hand exercises.

Although she was still responsive as of November 2008, she could no longer recognize her family, and had serious problems with her sight and hearing, although she was still able to smile and wave at visitors. Despite her worsening cognitive abilities, she still remained unusually healthy for her age, and was able to walk around her home with the aid of a walker. She enjoyed looking through her old family albums, sunbathing at her porch, eating Portuguese rice pudding and ice cream, as well as taking baths. Reportedly, she never smoked or drank alcohol. She also avoided eating meat, preferring to eat fish and vegetables.[2]

26 November 2008: Following the death of American Edna Parker, she becomes the oldest living person in the world for the final month of her life, becoming the first and only Portuguese person to ever hold this title.

Maria de Jesus died in Corujo, Tomar, Santarem District, Portugal on 2 January 2009 at the age of 115 years, 114 days.[3] The cause of death was reported as septic shock. Her death left 114-year-old American Gertrude Baines as the oldest living person.[4] 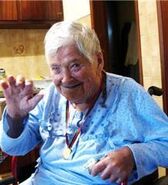