Marie-Louise Berthelot (née Desmas; 29 July 1907 – 16 January 2021) was a French supercentenarian whose age was validated by the Gerontology Research Group (GRG). She was one of the oldest known living people in Pays de la Loire, France at time of her death.

Marie-Louise Berthelot was born Marie-Louise Desmas on 29 July 1907 in Bourg d'Ire, Maine-et-Loire, Pays de la Loire, France. She worked at her parents farm when they moved in 1924.

In 1944, aged 37, she married Joseph Berthelot, who worked in the slate quarries. When they reached retirement age in 1963, they decided to settle down in Renaze, Pays de la Loire. They lived together until Joseph’s death in 1992 after 48 years of marriage. The couple never had children together.

In 1997, when Marie-Louise was 90, she moved into a retirement home. For her 106th birthday, she was driven to her former home in the same type of car that she had driven up until she was 90.

Marie-Louise’s 110th birthday celebration was held 10 days after her actual birthday, on 8 August 2017. When she entered the room, she was greeted with rounds of applause from her family, friends, and retirement home staff. She was upset at the start of the celebration, but soon cheered up to watch some dancers and enjoy her birthday cake.

Marie-Louise Berthelot died in Renaze, Mayenne, Pays de la Loire, France during the night on the 16 January 2021 at the age of 113 years, 171 days. At the time of her death, she was the fourth-oldest living person in France (behind Lucile Randon, Jeanne Bot, and Valentine Ligny) and the last living French person born in 1907. Her successor as the oldest living person in Pays de la Loire was Marie-Rose Tessier.

Marie-Louise Berthelot on her 107th birthday in 2014 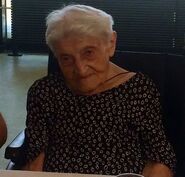 Marie-Louise Berthelot on her 112th birthday in 2019