Marie-Noelle Duhamel was born in Hersin-Coupigny, Pas-de-Calais, Hauts-de-France, France on 28 April 1912. Her parents were Albert Dehay and Therese Lefebvre (1887–1989). Her mother lived to the age of 101.

She met her husband Andre in Lille, when they both were students. They took the train together to join their families in Bethune. They had five children: the youngest, Jean-Dominique, died of illness at the age of 17.

During World War II, Duhamel's husband was made prisoner by the Germans. She told: "At the time, Andre was a captain. [As he was] prisoner, I only received the half of his pay. We hadn't much money. When the Americans liberated the prisoners, Andre came back in Paris. He was as thin as a rake. We had to get him used to eating again, like all prisoners."

In 1976, Duhamel was widowed. On 4 May 1993, she moved to the maison de retraite des Sœurs Augustines in Versailles.

In 2022, Duhamel was reported to be elegant. Even if she doesn't like that people take an interest in her, she has a lot ot things to say, and has a good memory. However, she said: "I don't see anything anymore; my hands have replaced my eyes." She still assisted to the Mass in the nursing home twice a week.

Marie-Noelle Duhamel currently lives in Versailles, Yvelines, Ile-de-France, France, at the age of 110 years, 62 days. She is currently the oldest known living person in Ile-de-France, and in Yvelines department. 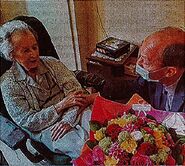