Marie-Therese Louise Bardet (née Jegat; 2 June 1898 – 8 June 2012) was a supercentenarian from France. She was the oldest person in France and Europe since the death of Marcelle Narbonne on 1 January 2012. Her age is validated by the Gerontology Research Group (GRG).[1] She was also the last known surviving French person to have been born before 1900.

Marie-Therese Bardet was born on 2 June 1898 to an unmarried mother (named Marie-Louise Jegat).[2] She married a man with the last name Bardet and had 2 children: Leon and Jeanne. Both were still alive at the time of their mother's 114th birthday; they were 90 and 88 respectively.

On her 114th birthday, her hearing and speech were both poor, but she ate with the other residents in her retirement home in Pontchateau, Loire-Atlantique.[3]

Marie-Therese Bardet died on 8 June 2012 at the age of 114 years, 6 days. She was the 7th-oldest person in the world when she died. After her death, Paule Bronzini, then aged 111, became the oldest living person in France and Maria Redaelli, then aged 113, became Europe's oldest person. 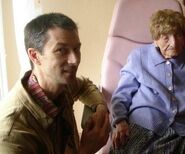