Anne Marie Jensen was born in Bakkeboelle, Vordingborg, Sjaelland, Denmark on 24 January 1849. She emigrated to the Wisconsin, United States around 14 September/October 1869 and married Anders Carstensen on 29 October 1869, near Green Bay, Wisconsin, three weeks after her arrival to the US. She had seven children. In 1880, with husband and five children she moved to Leigh, Nebraska. In 1882, her son Carl, was born. Her eldest daughter, Anna, died in 1886. One month later, her husband died. Marie has made two trips to her native country, Denmark, in 1897 and 1911. 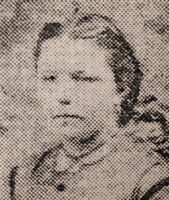 As a young woman.