Marie Dufour was born as Marie Vallat in the 3rd district of Lyon, Metropole de Lyon, Auvergne-Rhone-Alpes, France on 14 December 1911. On 5 March 1936, she married Pierre Dufour in the 6th district of Lyon.

Dufour lived in her own house until the age of 108. In July 2019, following a fall at home, she moved to the nursing home Castellane in Rillieux-le-Pape. In December 2019, she was reported to be the oldest of the four centenarians of the nursing home.

Dufour currently lives in Rillieux-le-Pape, Metropole de Lyon, Auvergne-Rhone-Alpes, France, at the age of 110 years, 243 days. She is currently the third-oldest known living person in Auvergne-Rhone-Alpes, behind Marguerite Larmignat, and a 110-year-old anonymous woman. She also is the oldest living person in Metropole de Lyon. 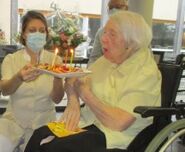