Not to be confused with Marjorie Douglas.

Marjory Stoneman Douglas (7 April 1890 – 14 May 1998) was an American journalist, author, women's suffrage advocate, and conservationist known for her staunch defense of the Everglades against efforts to drain it and reclaim land for development. Moving to Miami as a young woman to work for The Miami Herald, she became a freelance writer, producing over one hundred short stories that were published in popular magazines. Her most influential work was the book The Everglades: River of Grass (1947), which redefined the popular conception of the Everglades as a treasured river instead of a worthless swamp. Its impact has been compared to that of Rachel Carson's influential book Silent Spring (1962). Her books, stories, and journalism career brought her influence in Miami, enabling her to advance her causes.

As a young woman, Douglas was outspoken and politically conscious of the women's suffrage and civil rights movements. She was called upon to take a central role in the protection of the Everglades when she was 79 years old. For the remaining 29 years of her life she was "a relentless reporter and fearless crusader" for the natural preservation and restoration of South Florida. Her tireless efforts earned her several variations of the nickname "Grande Dame of the Everglades" as well as the hostility of agricultural and business interests looking to benefit from land development in Florida. She received numerous awards, including the Presidential Medal of Freedom, and was inducted into several halls of fame.

Douglas lived to 108, working until nearly the end of her life for Everglades restoration. Upon her death, an obituary in The Independent in London stated, "In the history of the American environmental movement, there have been few more remarkable figures than Marjory Stoneman Douglas."

The Stoneman and Trefethen extended family in 1893. Marjory is held by her father on the far right

Marjory Stoneman in her senior year at Wellesley College 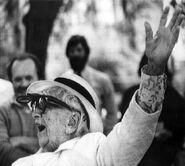 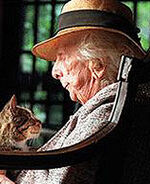