Marta Kivi (5 February 1912 – 23 August 2020) was an Estonian centenarian who was the oldest living person in Estonia since the death of Anna Kutt on 10 December 2018 until her death.

Kivi was born in Kakuna, Saare County, Russian Empire (present-day Estonia), on 5 February 1912. Her parents were Anton Kivi (1886–1944) and Juliana Julia Kivi (née Tappel; born 1886). She entered the first class of primary school in 1919. For a few years, she lived in Saint Petersburg, Russia, with her family. Later, they moved to Tornimae, Saare County, Estonia. Her father, Anton Kivi, worked as a teacher and headmaster at the Tornimae School. Marta's older brother, Aleks, also worked as a headmaster of the school. Her other brother, Boris, was an officer of the Soviet Army and later a director of the Leisi High School. In 1925, Kivi graduated from the Uuemoisa Primary School. She spent most of her teaching career at the "Tornimae Pohikool" school in the village of Karneri. In addition to the primary school teaching, Kivi also taught Estonian and German languages. In the autumn of 1944, she became director of the high school in Tornimae.

In 2001, Kivi moved to Kohila to live with her son, Juri. She lived in a nursing home twice. According to her son, Kivi's favorite activity is solving crossword puzzles. On 10 December 2018, Kivi became the oldest living person in Estonia, following the death of Anna Kutt. 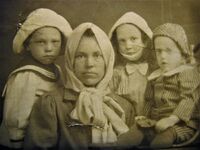 Marta Kivi with her mother and brothers.