Mary was born in South Lake, Leeds, Ontario, Canada on 12 August 1882. Her parents were John and Annabelle Dormer.

In 1912, she married Victor Rhodes; the couple had one child, a son called Murray. Victor died in 1954, and Mary continued to live in Seeley's Bay until 1968. She lived in her own home until 1986, when she moved to the Providence Manor nursing home in Kingston. 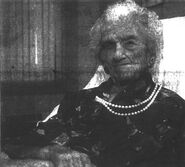