She was born in Fergus Falls, Otter Tail, Minnesota, USA on 8 June 1877. Her parents were Henry Hall and Eliza (née Comstock) Hall. She had five siblings.

She married Griffin Ford in Oklahoma, USA on 14 February 1897. The couple had three children. After some years Mary and Griffin divorced. Mary then married a man named Harry Kennedy. With Harry she had four more children. Harry died in the early 1920s, after which Mary remarried to Griffin Ford. Griffin died in 1928. Mary stayed in Oklahoma, USA for the remainder of her life. 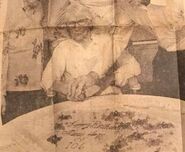