Mary Lena Parr (29 January 1889 – 29 October 2002) was an American supercentenarian. Her age has been validated by the Gerontology Research Group (GRG). She was the second-oldest person in the United States and in the world when she died. At the time of her death, she was believed to be the oldest in the United States, but after her death, it was discovered that Mae Harrington was actually older, and she dropped to third, but the withdrawal of Kamato Hongo brought her back up to second-oldest.

Mary L. Parr was born in Mishawaka, Indiana, United States on 29 January 1889. Her parents were William Walter Parr (1862–1953) and Lueta Crooks (1866–1959). She spent many years working for the American Red Cross in Cape May, New Jersey, first as a volunteer during World War I and then as a paid employee. She often said the secret to her longevity was never getting married. Parr was initially verified as being three days younger and born 1 February 1889 - which was her claimed birthdate - but the discovery of an original hospital birth record proved she was three days older, and thus aged 113 years, 273 days when she died at Suncoast Manor Health Center in Florida, United States on 29 October 2002. Parr came from a long-lived family: both her parents lived into their 90s, and her sister Lillian Prine died in 1991 at the age of 100. 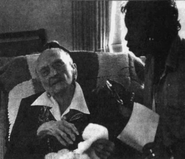