Later in life, Matilda received nationwide attention due to her claimed longevity.

Matilda Rogers died in Haywood, North Carolina, United States on 15 September 1963, supposedly aged 112 years, 348 days. Her age claim is contradicted by an 1860 US Census match stating her having been six years old at the time. 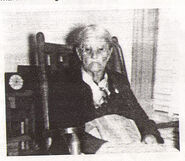 Rogers in her later years.