Melva Mae Radcliffe (née Cadmus; 3 March 1901 – 31 August 2012) was an American supercentenarian whose age is currently pending by the Gerontology Research Group (GRG). At time of her death, she was the oldest known person in New Jersey.

Melva Radcliffe was born in Paterson, New Jersey, USA on 3 March 1901. Her parents were Wilmer Cadmus and Ida (née VanRiper) Cadmus. She had three siblings. Her father was a former mayor of Paterson, president of the Second National Bank and a colonel in the U.S. Army, serving overseas in World War I.

She earned a master's degree from Paterson State College and subsequently taught third grade in Paterson School #13 for 45 years. Before her marriage, she lived with her mother in Paterson.

She drove until she was age 95. She has survived colon cancer and two broken hips. Her hearing was almost completely gone and her eyesight also.

Her great-great-grandmother Elizabeth Bogart, attended the inauguration of President George Washington. Her great-grandfather Charles Van Riper, who lived to 97, was a veteran of the Civil War. He was the oldest living Civil War veteran in New Jersey when he died.

Melva Radcliffe died at Waterford Glen assisted living facility in Paterson, New Jersey, USA on 31 August 2012 at the age of 111 years, 181 days. She is survived by one stepson James Radcliffe; two stepdaughters Susan Maddux and Frances Shepperdson; one nephew John V. Campana Jr.; one niece Joan Walther; one great-niece Jean Glicini; one great-niece Jill Potdevin and her husband Bob; and numerous other grandnieces and nephews and great-grandnieces and nephews. 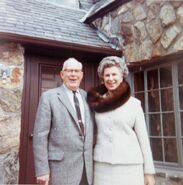 Melva Radcliffe in 1967 with her husband Jim.

Melva Radcliffe on her 110th birthday.