Dahlheimer was born in Hennepin County, Minnesota, USA on 25 January 1915. His parents were Phillip Dahlheimer and Delvina Dahlheimer (née Morrisette). He had six siblings.

At the age of 8, Dahlheimer was diagnosed with appendicitis. His surgery was with a doctor who unfortunately had lost his glasses. A nurse had to run for help at a different hospital to get another doctor to operate.

He studied until the eighth grade, when he started to work on the farm.

He married Mildred Weber in Fletcher, Hassan Township, Hennepin County, Minnesota, USA on 24 May 1938. The couple had 12 children.

Dahlheimer outlived both sons, a daughter-in-law, and a 48-year-old grandson. He lived at Guardian Angels Care Center in Elk River. 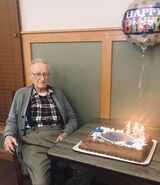