Miao Qingrong [Chinese: 苗庆荣] (16 March 1900 – 12 May 2010) was a Chinese supercentenarian whose age is currently unvalidated by the Gerontology Research Group (GRG).

Miao witnessed foot binding, and women's oppression until their liberation during New China era. Her daughter said: "My mother has known lots of ups and downs. When she was young, maybe she never knew that festivals like Women's Day would be celebrated."

In 1958, Miao moved in Tianjin with her family. Since 1969, she lived with her daughter and her son-in-law Zhou Guoshan [Chinese: 周国山], with who she isn't blood-tied. Since the 80s, her neighbours of Tianta Street (in Hexi District) celebrated her birthday each year.

Since 2009, Miao was reported to be the oldest living person in Tianjin. In March 2010, she was honoured on the Women's Day. Her daughter prepared her steamed eggs, and she was reported to love sleeping.

In April 2010, according to her son-in-law, Miao was in bad health, and suffered a pulmonary infection. She came back at home at the end of the month. Miao died of heart failure (a consequence of her pulmonary infection) at 5 a.m. on 12 May 2010 in Hexi District, Tianjin, China, at the age of 110 years, 57 days (110 years, 85 days by Chinese lunar calendar).

Miao Qingrong as an older woman. 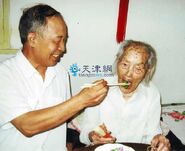