Miklos Angelus [Hungarian: Angelus Miklós] (9 September 1909 – 31 December 2016) was a Hungarian centenarian. At the time of his death, he was the oldest living male in Hungary.

Miklos was born on 9 September 1909, in Budapest, Austria-Hungary (present-day Hungary). As an adult, he worked in the textile industry.

Miklós was a lifelong hiker and key figure in the Hungarian hiking society for decades. Between 1957 and 1987, he was the vice-president of the Hungarian Hiking Federation. He organized many international exchange hiking programmes. He gave up skiing at the age of 86.

Miklos met his wife Edit in 1933 while skiing. The married in 1936 and had three sons, Tamás, Robert and Ivan (who is a renowned actor and dancer). In 2015, both Miklos (aged 106) and Edit (aged 103) were still alive after 79 years of marriage, making them the oldest living couple in the country. Edit sadly preceded her husband in death by one year. In 2013, a short film titled "Edit and Miklós" was shot about them. 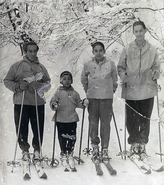 Miklós Angelus in 1960 with his three sons. 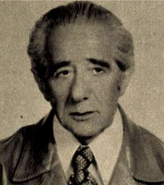 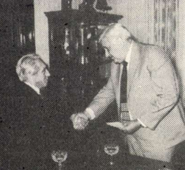