Mildred "Mila" Mangold (née Plecity; born 14 November 1907) is an American supercentenarian whose age is currently validated by the Gerontology Research Group (GRG). She has been the oldest living person in the U.S. state of California since the death of 114-year-old Lucy Mirigian on 12 February 2021.

Mangold was born in Saline County, Nebraska, United States on 14 November 1907 to Albert and Barbara (Vokoun) Plecity. She remembers the 1918 Spanish Flu epidemic. She also has memories of soldiers returning from World War I. She met her husband, Walter S. Mangold, in Southern California. He worked in public health and she had a job as a secretary in a health department in Los Angeles, where she lived during the Great Depression.

During the 1940s, the couple moved to Berkeley, California, where Walter became a professor at UC Berkeley. He helped to found the field of environmental health. They had one son together, Donald.

There has been a history of longevity in Mangold’s family. Her grandmother lived to be 95, and her sister, Mae, almost made it to 101. She currently lives in an assisted living facility in El Cerrito, California, United States, at the age of 114 years, 71 days.

Mangold in August 2016 with son Donald

Mangold in her centenarian years 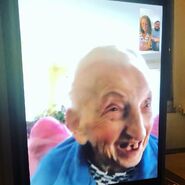