Kitagawa was born on 3 November 1905 in Echigawa (now Aisho), Shiga prefecture, Japan. Her father was a farmer, and her husband worked for Japanese National Railways. They moved from one place to another due to his job, before eventually settling in Hikone, Shiga, where they rented about 2,500 square meters of land to grow rice and vegetables.

Kitagawa continued to work as a farmer until she was 100 years old. In 2017, she moved in to a nursing home in Hikone, Shiga. She reportedly enjoyed knitting and handcrafts, and her favourite food was beef. Kitagawa died on 19 December 2020 at the age of 115 years, 46 days.

On 15 February 2019, Kitagawa became the oldest person ever documented from Shiga Prefecture after breaking the previous record of 113 years, 103 days set by Niwa Kawamoto in 1976.

At the time of her death on 19 December 2020 at the age of 115 years, 46 days, Kitagawa was one of the top-60 oldest people of all-time whose age has been validated by the GRG. She was also the oldest validated person to die in 2020.

Mina Kitagawa on her 108th birthday

Mina Kitagawa at the age of 109 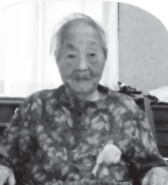 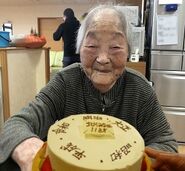