Misao Okawa (née Aoki; 5 March 1898 – 1 April 2015), also sometimes romanized as Misawo Okawa, was a Japanese supercentenarian who is the fourth-oldest validated person ever from Japan, and was also the oldest living person in the world from the death of the 116-year-old Jiroemon Kimura, who was also the oldest validated man ever, until her own death on 1 April 2015. She was the oldest person ever from Japan until 1 September 2017, when her age was surpassed by Nabi Tajima.

Okawa died in Higashisumiyoshi-ku, Osaka, Japan, on 1 April 2015, at the age of 117 years, 27 days. After her death, Gertrude Weaver (also born 1898) became the oldest living person, though only for six days. She was also the oldest living woman after the death of Koto Okubo on 12 January 2013 until her own death over two years later.

Okawa currently ranks as the oldest validated person ever from Osaka Prefecture, the fourth-oldest Japanese person ever (behind Kane Tanaka, Nabi Tajima, and Chiyo Miyako), and also the 10th-oldest person on record whose age is validated by the Gerontology Research Group (GRG).

Okawa married her husband Yukio, who ran his own business in Kobe, in 1919 and had three children, two daughters and a son. As of February 2013, only one of her daughters, Shizuyo (aged 97), and her son Hiroshi (aged 99), were still alive. Her husband died on 20 June 1931 at the age of 36. In 2000, she broke her leg at the age of 102. But she said that she was doing leg squats. She was able to walk until she was age 110, after which she needed a wheelchair to prevent her from falling over. 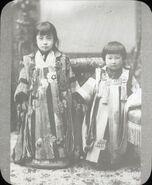 Okawa (right) with her older sister in circa 1900

Okawa in an undated photo

Okawa (aged 113), with her son Hiroshi and other relatives

Okawa with her son, Hiroshi, granddaughter and great-grandson Hibiki