Morrie Markoff (born 11 January 1914) is an American blogger centenarian who is currently the oldest known living blogger in the United States, and in the world.

Morrie Markoff was born in a tenement in New York City, New York State, USA on 11 January 1914. His oldest brother died of Spanish flu, Markoff was also infected but survived.

He was trained as a machinist at the suggestion of his father, a Russian-born immigrant, but starting out of the Great Depression, Markoff took whatever jobs he could get and eventually settled on vacuum repairman.

During World War II, Markoff worked as a military machinist, and later grew an air conditioning and appliances business.

He became the oldest known living blogger in the world, following the death of 109-year-old Dagny Carlsson on 24 March 2022.[citation needed]

In May 1938, with his future wife Betty on their first date in New York 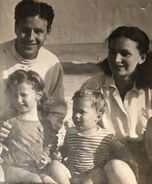 In 1940s, with his wife Betty and their children Judith and Steven 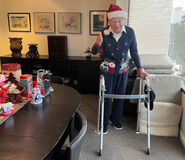