Motoi Fukunishi (Japanese: 福西基; 25 March 1910 – 22 August 2020) was a Japanese supercentenarian whose age is currently unvalidated by the Gerontology Research Group (GRG). He was the oldest living man in Japan at the time of his death.

Motoi Fukunishi was born in Shimotsuma City, Ibaraki Prefecture, Japan, on 25 March 1910. Up until 2015, he was the director of Shimotsumashotomo Kindergarten.

On 27 March 2020, he became the oldest living man in Ibaraki Prefecture, following the death of Takeshi Hanawa.

He was hospitalized in the late July 2020.

On 11 August 2020, he became the oldest living man in all of Japan, following the death of Shojiro Shirai. 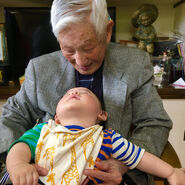