Nina Willis (née Frazier; born 14 January 1909) is an American supercentenarian who is the oldest known person living in the US state of Georgia. Her age is currently unvalidated by the Gerontology Research Group (GRG).

Nina Willis was born on 14 January 1909 in Robinson, Georgia, USA, and grew up in the town working as a farmer. She was one of 20 children. Her brother, Bethuel Frazier (1902–2011), lived to be 109. In 1947, she moved to Atlanta, Georgia, where she did domestic work and worked in Kessler's Department Store. She was married to Charles Willis, and the couple did not have any children.

Willis currently lives in a retirement home in Atlanta, Georgia, where she celebrated her 111th birthday in January 2020. She reportedly still watches baseball and basketball whenever there are games on TV, and reads the newspaper every day when she wakes up. Her caretaker is her sister, Pecola Kirby, with whom she is very close. 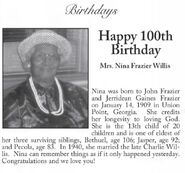 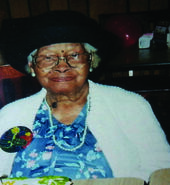 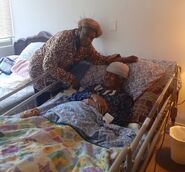