Noeme da Silveira Freitas (7 September 1905? – 9 April 2021) was a Brazilian longevity claimant whose age is currently unvalidated by the Gerontology Research Group (GRG). If her claimed age were validated, she would have been the third-oldest living person in Brazil at the time of her death, behind only Antonia da Santa Cruz and Francisca Celsa dos Santos.

Noeme da Silveira Freitas claimed to have been born in Fortaleza, Ceara, Brazil, on 7 September 1905. At the age of 2, she was taken to a convent in the municipality of Caninde, Ceara, where she remained until the age of 18. Noeme and her husband were childhood friends who got married after they left school. They had 7 children, including Elizabeth (aged 74 in November 2019). Her husband died at the age of 98. Her life's job was sewing. Around the age of 99, she started having problems with walking.

Noeme da Silveira Freitas on her claimed 109th birthday in 2014

Noeme da Silveira Freitas on her claimed 110th birthday in 2015 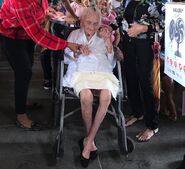 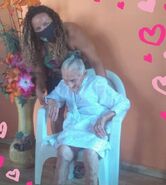