Cora Opal Goode (née Griggs; 3 June 1907 – 17 September 2019) was an American supercentenarian whose age has been validated by the Gerontology Research Group (GRG). At the time of her death, she was one of the oldest known living people in California, USA.

Goode was born Cora Opal Griggs in Oklahoma Territory, USA, on 3 June 1907, five months before the territory became a state. Her parents were James Cleveland Griggs (1885–1951) and Mary Elizabeth (née Bowen) Griggs (1888–1965). The family moved to Texas via covered wagon when Opal was an infant, but a few years later, they returned to Oklahoma. Her father worked in the oil fields.

Goode remembered seeing the first Model-T cars, seeing a woman driving a car for the first time, and seeing a car that wasn't black. She also remembered World War I, especially when it ended. She wanted to attend the celebrations, but her father didn't let her because he thought that all the excitement would be too much for an 11-year-old girl to handle.

Goode was the valedictorian of her senior class in high school on 13 May 1926. On September 28, 1926, she married Henry Goode and had a daughter, Cheryl, with him. They eventually settled in Ridgecrest, California in early 1945, where Henry spent the remainder of World War 2 working at China Lake. She worked at Ridgecrest's first bank, which opened in 1946.

Goode had originally agreed to work at the bank until Christmas 1946, but ended up working there for around 24 years, until she retired in 1970. Her husband Henry died in 1976 aged 73, after almost 50 years of marriage. Since then, she has enjoyed spending time with her friends and family. She lived on her own until she was 105. Her secret to a long life was "hard work and clean living." 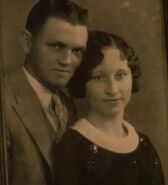 Undated, with her husband Henry Goode

Undated, with her husband Henry Goode

On her 110th birthday

On her 111th birthday

On her 112th birthday