Pearl Berg (born 14 February 1910) is an American supercentenarian whose age is currently unvalidated by the Gerontology Research Group (GRG). She currently is the third-oldest known living person in California, behind Mila Mangold and Edie Ceccarelli.

Pearl Berg was born on 14 February 1910 in Pittsburgh, Pennsylvania, USA. She moved to Los Angeles, California with her family in 1930. She became a member of Temple Israel in 1937 and continues to attend occasional services at the synagogue, usually during the High Holy Days. She was married to Mark Berg, with whom she had at least two children, Alan and Robert.

After her husband died in 1989, Berg maintained a social life for herself by joining a book club, regularly attending concerts and plays, and becoming more involved with a bridge group. She was active in Temple Israel’s Sisterhood and was asked to write notes to bereaved families on behalf of the temple, which she continued to do until the age of 105.

Berg currently lives in her own home in the Los Feliz neighborhood of Los Angeles, California, but has caregivers with her 24 hours a day. She celebrated her 110th birthday in February 2020. 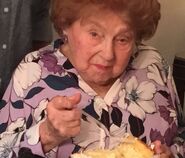