Peter "Pete" Joffre Goutiere (born 28 September 1914) is an Indian-born American centenarian who is one of only two CNAC pilots still alive, the other is 109-year-old Moon Fun Chin.

His father was a superintendent of police in an area outside New Delhi. At age 14, after the death of his father, Goutiere moved with his mother and his sister to Bangor, following his other sister Christine Weston (1904–1989), who moved to Maine after marrying a Bangor businessman. She became a successful author.

He graduated from Brewer High School in his early 20s, after dropping out for a few years. He married with his former English teacher Helen Brimmer in Maine, USA on 26 August 1939. The couple had one children: David. Later, the couple divorced.

In 1939, he enrolled at the University of Maine and became an American citizen.

Goutiere signed up through the Civilian Pilot Training Program and began training in Bangor. His first training flight was in 1939.

From 1943 until 1947, Goutiere was one of the American pilots for China National Aviation Corporation (owned in part by Pan American World Airways) who was helping to bring into China, troops, food, fuel and other supplies after Japan severed China’s only land supply routes through Burma.

In 1940s, he married for a seocnd time, but later divorced. At that point, he became the personal pilot and friend for Maharaja Sawai Man Singh II.

After the creation of Pakistan in 1947, Goutiere worked transporting pilgrims by plane to the Hajj in Mecca.

In the 1950s, Goutiere moved to Jordan at the request of Hussein bin Talal. Goutiere helped Hussein get certified on the Boeing 707.

He worked in Beirut for six years before moving on to become a pilot for an airline in Ghana. In 1962, Goutiere returned to the United States and began working for the FAA.

In 1973, he moved to work in Lebanon, but the Lebanese Civil War forced him to leave with only the clothes on his back in November 1975. Later, he was transferred to the FAA New York, where he working until his retirement.

He married for a third time with Evelyn (born 11 January 1950) around 1987. The couple had two children: Christian and Hannah.

In 1994, he published a book called Himalayan Rogue. He had at least one grandson: Miles Soboleski.

As of September 2020, he is one of only two CNAC pilots still alive, the other is Moon Fun Chin (born 20 March 1913). The two men remain in touch and are featured in China’s Wings, Gregory Crouch’s book on this piece of World War 2 and aviation history.

Goutiere as a young man 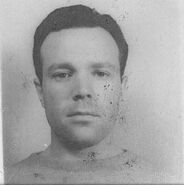 Goutiere with his CNAC uniform in New York in 1944

Goutiere with his wife Evelyn in Burlingame, California in 2005 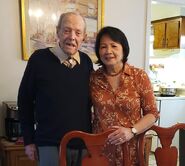 Goutiere with his wife Evelyn