Corio was born on 22 February 1912 to George and Elizabeth Corio and grew up in Jersey City, New Jersey. He had six siblings, all of whom are deceased as of April 2022. As a teenager, he played pool at a local club with Frank Sinatra, who grew up in nearby Hoboken.

Corio worked in construction and trucking for a while, before getting a job at the Becton Dickson medical supply company, where he stayed until retirement. He married his wife, Margaret, in 1956, and they had two sons, Philip and Ron. Margaret died in 2000.

Corio moved to New Mexico in 1979. Ten years later, he founded a company, Array Technologies, which is now the largest manufacturer of solar tracking systems in the United States.

In 2001, after his wife's death, Corio moved to Albuquerque, New Mexico to live with his son, Ron. Corio practiced carpentry as a hobby, so Ron set up a wood shop at Array Technologies, where he made things such as cutting boards and cabinets. He went there regularly until he suffered a minor stroke in April 2019, which impeded his woodworking ability.

In March 2020, both Corio and his son contracted COVID-19 during the coronavirus pandemic. On 13 March, Corio fainted in his bathroom and spent three days in hospital, where he was initially diagnosed with pneumonia. However, the following month, his doctor gave him an antibody test which revealed he had in fact contracted coronavirus. At the age of 108, Corio is the oldest known male to have survived the disease as of January 2021. Corio's son Ron became New Mexico's first billionaire.

Corio, centre, with his brothers in 1926 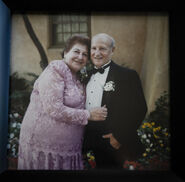