Qiu Fuzhen [Chinese: 邱福珍] (born 1 May 1910) is a Chinese supercentenarian whose age is currently unvalidated by the Gerontology Research Group (GRG).

On 5 January 2017 (8 December 2016 by lunar calendar), Qiu went with her granddaughter at Laba Festival in Jiangjin District. She ate porridge. Two years after, Guo Lin [Chinese: 郭林], recalling her taste for porridge, delivered her some Laba congee.

In December 2017, Qiu was reported to be the sixth-oldest living person in Jiangjin District. She lives generally two monthes in each of her sons' house. She is not ill, has a soft and joyful personnality, likes watching television but especially speaking with other people. She eats mush, and drinks a carton of milk each morning.

In April 2021, Qiu celebrated (by lunar calendar) her 111th birthday at an hotel. She was congratulated by the local Civil Affairs Bureau. At that time, she had 30 grandchildren, and more than 100 great-grandchildren and great-great-grandchildren, with a total of 143 descendants (the younger aged 2). Her descendants live in Xinjiang, Jiangsu, Shanghai, Fujian, Guangdong, Sichuan, Guangxi and other places, and they were so numerous that some ones didn't know each other.

In October 2021, Qiu was reported to be the oldest living person in Jiangjin District, Chongqing. 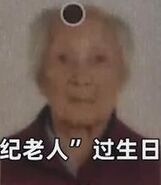 Qiu Fuzhen as an older woman (on her ID card).

Qiu Fuzhen on her 111th birthday, with some of her descendants.