Reita Fennell (20 November 1907 – 17 April 2021) was a Canadian supercentenarian whose age is validated by the Gerontology Research Group (GRG).

Fennell was born in Melfort, Saskatchewan, Canada, on 20 November 1907. She was one of ten children and spent her childhood on the family. During the Spanish Flu pandemic in 1918, she lost some family members.

In 1929, she married Albert Fennell. She got her driver license at the age of 60, her husband losing his eyesight.

At the time of her 107th birthday in 2014, Fennell stated that she didn’t follow any specific diet and didn’t have any secrets for how to live a long, healthy life. She reportedly kept busy with a wide variety of activities. She has three grandchildren, seven great-grandchildren, and four great-great-grandchildren.

According to her granddaughter-in-law Carmen Irvine, Fennell was a "social butterfly". Actually, she used to celebrate her birthdays with close to 100 people. However, she couldn't have done it during her 113th birthday in 2020, which was during the COVID-19 pandemic. Instead, she used the application FaceTime to keep in touch with the relatives she couldn't see.

Fennell as a young woman.

Fennell as a centenarian. 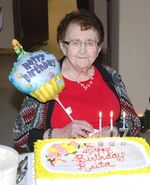