Reuben "Rube" Sinclair (born 5 December 1911) is a Canadian supercentenarian who is currently the oldest known living man in Canada, and the oldest living Canadian Second World War veteran. His age is currently unvalidated by the Gerontology Research Group (GRG).

Reuben Sinclair was born on the family farm near Lipton, Saskatchewan, Canada. His birth certificate was registered on 5 December 1911, but according to his older brothers, he was born in the summer of 1911.

His parents were Yitzok Sinclair (né Sandler) and Fraida (née Dubrovinsky) Sinclair. He had four siblings: Samuel, Sol, Clara, and Joe. His parents and his oldest siblings Samuel, and Saul was born in Ukraine and moved in the 1900s to Saskatchewan, where they was given land by de Hirsch’s Jewish Colonization Association.

Sinclair joined the Royal Canadian Air Force during the Second World War and was stationed in North North Battleford, Saskatchewan. His youngest brother Joe served in the army and after the war joined Rube in British Columbia. They started Sinclair Bros. Garage and Auto Wrecking, in Richmond, just across the two old Fraser Street bridges from Vancouver.

He married a woman named Ida and had three children: Nadine Lipetz, Karen, and Len. In 1964, Sinclair moved with his family to Southern California. In 1994, his wife Ida suffered a stroke and the couple moved back to British Columbia. She died in 1996.

He became the oldest known living man in Canada, following the death of 111-year-old Ja Hyung Lee on 12 February 2022.

Undated, during his military service

Undated, with his wife

Undated, with his wife 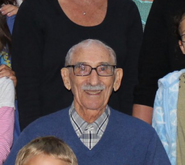 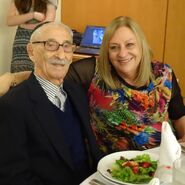 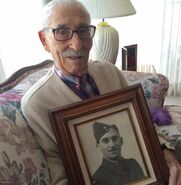 Aged 104, holding a photo taken during his military service